My Review - Every Now & Then by Karen Kingsbury 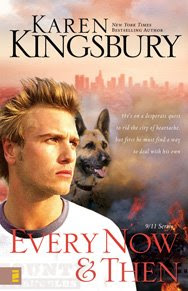 EVERY NOW & THEN, is the third book in the 9/11 series. It follows Alex Brady, the surviving son of a New York firefighter. Alex’s world stopped the day his father died. Feeling the need to rid the world of evil, he moves to California and becomes a K-9 officer for the LAPD. Breaking off his relationship with the only girl he ever loved, and distancing himself from his mother who has remarried, Alex has a single focus in life – not to allow the likes of 9/11 ever to happen again.

When an environmental terrorist group makes it known they will use arson and the fire season in L.A. to make their point about over developing the land, Alex decides to go undercover and infiltrate the organization to find out what their next target is. Alex’s buddies on the force realize Alex is an emotional ticking bomb ready to go off, but they can’t seem to get through to him. When Jamie Michaels – the wife of one of Alex’s officer buddies – sees his pain, she decides to tell him how she herself was affected by 9/11. Jamie also goes in search of the woman Alex left behind, hoping to get a better picture of who Alex was before his father’s tragic death. But time is running out. With the next target chosen by the terrorist, both Alex and Holly Brooks – the girl he left behind – could become the next victims of the REA terrorist group.

EVERY NOW & THEN was good, but I have to say, I don’t think it parallels Karen Kingsbury’s previous works. The book seems to travel at a nonchalant pace. I never found myself glued to it like other Kingsbury books. We know early on where the terrorist will strike next and who will be affected by it, which made for the actual attack to be a little anticlimactic. Though one shocker did pull from me the emotion I’ve come to associate with Karen’s books, it was the only time I really felt connected to the story.

I still enjoyed EVERY NOW & THEN, and the way it tied in characters from the previous books, it just wasn’t the page turner I thought it would be.

Posted by Tamara Tilley at 3:37 PM