It is time for a FIRST Wild Card Tour book review! If you wish to join the FIRST blog alliance, just click the button. We are a group of reviewers who tour Christian books. A Wild Card post includes a brief bio of the author and a full chapter from each book toured. The reason it is called a FIRST Wild Card Tour is that you never know if the book will be fiction, non~fiction, for young, or for old...or for somewhere in between! Enjoy your free peek into the book!

You never know when I might play a wild card on you!

***Special thanks to Rick Roberson for sending me a review copy.*** 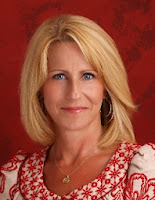 Real, relatable and refreshing are words often used to describe Bonnie L. Floyd. Perhaps it is because she could easily be a next door neighbor to any of us. Bound to a Promise is a true story of tragedy and redemption that unexpectedly resulted in the opportunity to share that story with others and ultimately, the birth of Bonnie Floyd Ministries.

For more than seventeen years, Bonnie has taken her contagious zeal for the Lord and her authentic love for people to various conferences, retreats and churches throughout the United States and beyond. Her powerful and dynamic messages bring the Scriptures alive to audiences of all ages and offer useful and practical ways to apply them to everyday living. For several years, Bonnie served in various capacities with Women of Faith and is currently an administrator for Barry & Sheila Walsh. More importantly, she has a deep love and respect for God's Word that is born out of her service as a teacher and small group leader for over 23 years.

Bonnie has been married to "her Donnie" since 1987. Both California natives, they now make their home in Celina, TX - a home which provides a perfect setting to delight children and to share Bonnie's passion for cooking by entertaining family and friends. They make their church home at Genesis Metro Church in Frisco, TX where Donnie serves as an elder and Bonnie, who was ordained a Minister of the Gospel in 2010, is an active member in women's ministries.

Bound to a Promise tells the amazing true story of God's faithfulness in the face of unimaginable loss. Bonnie Floyd's father and stepmother had been living a dream life-serving as caretakers of a private tropical island and traveling the world in a sailboat. That life was cut short when three young men boarded their yacht as it was anchored off the coast of Antigua. Determined that there should be "no witnesses" of their theft and brutality, the assailants shot all four people on board. Bound to a Promise includes the fascinating account of the Antiguan trial that brought her parents' killers to justice, featuring some dashing Scotland Yard detectives, a criminal in search of redemption, and many other memorable characters from the island. Bonnie's colorful descriptions of her parents' adventures abroad and her time in Antigua lighten the mood and add a touch of travelogue to the true crime drama. In a truly inspirational twist, Bonnie arranges a meeting with one of the confessed attackers, a man who would eventually claim her as family.

Prologue
February 1, 1994: It was six o’clock in the morning on what seemed a normal, cold, foggy day in Fresno, California. Then the phone rang. Donnie was already up and in the shower, so I sprang up in bed, cleared my throat, and answered the phone with my cheery, “Good morning!” as though I had been up for hours.
“Is this Mrs. Bonnie Clever-Floyd?”
I suddenly froze as a cold chill of fear crawled up my spine.
The voice on the other end of the phone was unfamiliar, his question strange, and it sent a shiver through me. For the first time in my thirty-three years, the last person I wanted to be was Bill Clever’s daughter.
“Mrs. Floyd, my name is Paul Howard, and I’m calling from the United States embassy in Antigua. I’m sorry, ma’am, but I need to ask you again, are you Bonnie Clever-Floyd?”
I stood motionless, still confused about why I was afraid to admit to this man who I was. I knew his question must pertain to my dad. Why else would he have been asking if I was Bonnie Clever-Floyd? I had never hyphenated my name, and as hard as it was to give up the name Clever, when I married Don Floyd, I became a Floyd through and through.
After a long pause, I firmly replied with a cracking voice, “No!”
By that time, I was sure Mr. Howard had discerned that the phone call was not going to go well. But then again, do those types of calls ever go well? “Mrs. Clever-Floyd, are you the daughter of William Norman Clever?”
He asked for the third time.
I simply could not reply. I was pacing the floor; dread had filled the room, fear had taken up residency, and confusion had consumed my mind. I heard Mr. Howard say, “Mrs. Floyd, Mrs. Floyd, are you still there?”
I knew I had to answer this Mr. Howard. I could not hang up and pre- tend the phone had never rung; it was far too late for that now.
“Yes, Mr. Howard, I am still here.”
With relief in his voice, he asked for the last time, “Mrs. Floyd, are you the daughter of William Norman Clever?”
After a long silence, I answered solemnly, “Yes, Mr. Howard, I am.”
So now the inevitable was about to be spoken. My life was about to change in ways no one in their wildest imaginations could have ever dreamed. But it was not a dream; it was a nightmare, and I was wide awake!

Chapter 1
Growing Up In Two Different Eras
As I stood paralyzed in time by the dread of what was coming next, highlights of my life that led to this terrifying moment played through my mind like a B-rated movie trailer in the old theater on a Saturday afternoon.
I grew up in Columbia, California, which is a historic state park in the Mother Lode Country. Columbia was founded during the gold rush days back in 1850 by a small party of prospectors who discovered the lode or main vein of gold in that region, the mother lode. News of their discovery spread, and a flood of miners soon joined them.
Unlike many settlements that have changed with the times, Columbia seems to be frozen in the 1800s. Growing up there was wonderful! How many kids get to grow up in two different eras at the same time?
Within the state park my family owned two popular saloons and the Columbia House restaurant, which was opened by my grandpop in 1958. Then in 1960 Dad took it over after moving to California from New Jersey with Mom and my two sisters, Susan and Linda. I came along in December of 1961, so unlike the rest of my family, I am a native Californian.
The Columbia House was a favorite place among the locals as well as visiting tourists. Everything on the menu was scrumptious, and all our recipes were originals and made from scratch. Dad’s navy bean soup actually made him a local celebrity—so much so that the townspeople called him “Billy Bean Soup.”
Dad began calling me “Bonnie Bean Soup” after himself, and eventually I became just “Bean.” I loved being called Bean better than Bonnie. Every time Dad called me Bean, I heard him say, “I love you.” Since it was my dad who nicknamed me Bean, it was the same honor to me as a son who is named after his father. After all, I secretly wished I had been born a boy so I could be even more like my daddy!
One of my favorite spots in town was the stagecoach. You could always find me at the counter selling tickets, riding shotgun with the driver or on horseback with the stagecoach bandit. Robbing those unsuspecting tourists was so much fun. It’s a good thing I had to wear a bandana over my face because I couldn’t keep myself from laughing.
I had a great life as a child, and I cherish my memories of those days. I would not trade one moment of my childhood. I felt secure in my parents’ love for me and for each other. But the climate soon began to change.
To think their fighting could possibly lead to a divorce was definitely not a place I wanted to go in my mind. I had seen too many of my friends go through that, and the end result was always the same—the parents hated each other, and my friends wound up spending every other weekend with their dads. I was determined that was not going to happen to this “daddy’s girl.”
Don’t get me wrong; I love my mom. She is a wonderful mother who was always about her family and found her fulfillment in just being Mom. There has never been a time when Mom was not there for my two sisters and me. My dad was adventurous, handsome, intelligent, and successful. He was determined to live life to the fullest, and unlike my mom, he didn’t seem content with just being a dad. He was eternally yearning, trying new things.
To keep himself content, Dad began accumulating businesses. He also started buying “toys,” such as boats and motorcycles. His first purchase was a ski boat, and then a twenty-four-foot pleasure boat he and Mom named the Bonnie Sue Lin. One thing was becoming apparent—Dad was never content for long. Soon the Bonnie Sue Lin was not enough. He had to go for something bigger.
The Sarsaparilla was a beautiful, thirty-six-foot Grand Banks yacht, and because it was an ocean-going vessel, Dad started making plans for the big trip he always talked about taking. His dream was to go out hundreds, even thousands of miles beyond the Golden Gate Bridge. And what he really wanted to do was stay out for a few months, instead of a few days. His plan was to sail the coast of California into Baja, Mexico, down and around the tip of Cabo San Lucas, and up to La Paz into the Sea of Cortez.
And that is exactly what we did.


Our Mexico trip was more wonderful than any of us could have imagined. Even my sister Linda, who was in the prime of her teens and not one bit happy about taking an extended vacation, had the time of her life. We grew close as a family in ways we had never experienced before. All we had was each other, and we found that each other was all we needed. Laughter always filled the sea life air. I believe one of the greatest things children can experience is watching their parents laugh together and love on each other. Within just a few short months after returning home, our close-knit family started unraveling. How I wish we could have just returned to the sea.

Posted by Tamara Tilley at 4:20 PM