My Review - Heart of the Country 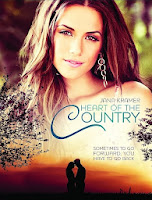 SOON TO BE A MOVIE
HEART OF THE COUNTRY is a wonderful story of love, forgiveness, and second chances.


FAITH is running.  But then again, that’s what she’s always done.  After the death of her mother, she left North Caroline and her family behind for Julliard in New York City. Meeting Luke Carraday wasn’t chance, it was fate.  Though her life is nothing what she expected it to be, it is charmed none the less.  She and Luke are riding high until it all comes crashing down around them.


Luke Carraday was born into success and wealth, but it’s not all he wants it to be.  Working alongside his father and older brother he is merely a piece of the Carraday dynasty.  With his father and brother making all the important decisions, he feels he needs to branch out on his own, make his own way.  So, he leaves his father’s company to prove he is a success in his own right.  With Faith at his side, life couldn’t be better.  But then disaster strikes and he loses everything including Faith.


Crushed by Luke’s deception, Faith turns to the only place she knows to go.  Home.  Though her father greets her warmly, her sister isn’t as amiable.  She knows she doesn’t deserve their forgiveness, but she tries as best she can to rebuild these fragile relationships while deciding if her marriage is worth saving.


I absolutely loved HEART OF THE COUNTRY.  It was warm and heart-breaking all in one.  The best part about it was that I knew it was going to be made into a movie starring Gerald McRaney and Jana Kramer, so I had no problem envisioning these characters in all their turmoil and heartache.  The book was written in a unique way, with each chapter narrated by one of the main characters.  It really allowed the reader to be able to establish a relationship with each character and better understand what made them tick.  Each character was aware of their weaknesses and shortcomings.  They just were always sure how they could overcome them.  I can’t wait for the movie’s release on December 3rd.  I am going to pre-order it today!

Posted by Tamara Tilley at 5:56 PM