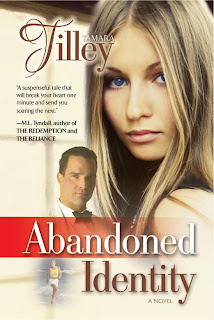 A corporate clash.
A complicated romance.
A shocking secret.
A dangerous journey.

Jennifer Patterson and Harrison Lynch don’t see eye-to-eye. Since the day corporate brought him in to fill the job that should have been hers, they’ve been at odds. That is until one night when they are stuck in their corporate offices by an unexpected blizzard and Harrison sees her in an entirely different light.

But the next day, Jennifer does the unexpected—she disappears.

Though Harrison tries to find her, shocking news brings his investigation to an abrupt end. But not his pre-occupation with the vulnerable woman revealed to him one stormy night.
Three years later, while vacationing on the California coast, he sees her . . . he’s sure of it . . . or is it just a figment of his imagination

Review: "An exciting, suspenseful tale that will break your heart one minute and send you soaring upon the highest mountain the next, a story of how God can reach down through the love of one man and rescue a precious woman from a dark pit of anger, fear, and betrayal."
-M.L. Tyndall, author of The Redemption and The Reliance

Posted by Tamara Tilley at 8:14 AM