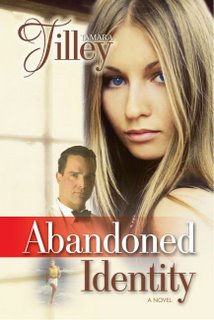 
I’m excited to announce Evergreen Press will be publishing my second novel in 2007.
I loved writing this story. Though I knew how it would begin, I had no idea how it would end. Jennifer Patterson turned out to be such an intriguing character. Her many layers surprised even me. Harrison Lynch proved to be irresistible. His drive and determination was tempered by a gentle, compassionate quality. His wiliness to open himself up to what appeared to be an uphill battle proved his dedication to helping Jennifer put her past to rest.
I’ve included a small synopsis below to give you a peak into the storyline of Abandoned Identity. I hope you enjoy it. ♥

Jennifer Patterson has been groomed for a promotion. But instead of getting the nod from corporate, she’s bypassed and the position is given to newcomer, Harrison Lynch. She and Harrison clash from day one. She refuses to be a team player and does everything she can to one-up Harrison in front of key clients. When he’s finally had enough, he gives her an ultimatum, get on board or be fired.
When a freak snowstorm forces them to spend the night at their corporate offices, Jennifer, weakened by a virus and a homemade concoction of medications, allows Harrison to see her vulnerable side. Harrison realizes there’s more to Jennifer than the driven, sharp-tongued adversary he's battled in the boardroom. With his interest peaked, he looks forward to getting to know her better.
The next day, Harrison is shocked to find out Jennifer's given notice, and in a matter of days has disappeared. When he uses her employee records to try and find answers to his questions, he realizes the information corporate has on file is false, leaving Harrison even more mystified about who Jennifer Patterson really is. He continues his search determined to find out what she's hiding. Shocking news brings his investigation to an end, but not his preoccupation with the vulnerable woman revealed to him one stormy night.
Three years later, while vacationing with his brother on the coast of California, he sees her; he’s sure of it . . . or is it just a figment of his imagination?
Posted by Tamara Tilley at 3:39 PM