My Review - Standoff by Patricia Bradley 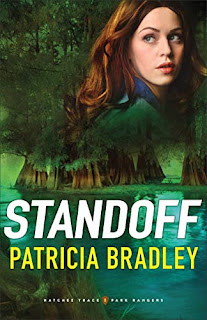 STANDOFF by Patricia Bradley embodies the meaning of the word suspense. The intrigue builds as the characters are fleshed out and the complexity of the story intensifies.

Brooke Danvers, a newly commissioned park ranger, will stop at nothing to find out who killed her father and why. What she did not plan for is having Luke Fereday help in her quest. Her childhood crush is an enigma. When he magically appears on the scene, with a vague story of why he is back home, she doesn’t think much of it. But, the more he inserts himself in her investigation, the more she realizes he isn’t who he says he is. Keeping him at arm’s length is her plan, but her heart is not following her lead.

Luke Fereday can’t explain to Brooke his interest in her father’s death or the other homicides plaguing the city of Natchez. He also can’t convince his heart to stay out of the matter. Even though his feelings for Brooke deepen, he knows she deserves more than he can offer her. Especially since the most eligible bachelor in town is pursing her. As Luke races to find out who all the players are in the drug cartel he is investigating, Brooke finds herself smack dab in the middle.

STANDOFF exemplifies romance/suspense.  The rate in which the suspense builds keeps pace with the development of the romance between Brooke and Luke, even adding the twist of Jeremy and Molly to pull on Brooke’s heartstrings. Though I applaud STANDOFF, the reason I didn’t give it five stars is because, though the momentum did build, the beginning starts out a bit slow. However, being a fan of Ms. Bradley, I knew she would deliver the goods in the end.

I received a complimentary copy of this book from Revell and was not required to write a positive review. All opinions expressed are mine.

Posted by Tamara Tilley at 9:26 AM