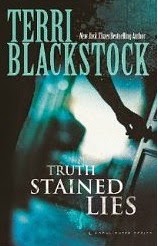 TRUTH STAINED LIES is consummate Terri Blackstock. Action, suspense, with just a thread of romance.  I haven’t read one of Terri’s books in a long time.  I stockpile them, but haven’t picked one up lately.  So glad I did.


Cathy Cramer is a blogger of crimes.  A former lawyer, she sits in on high profile cases and then blogs about them, usually adding her indicting two cents.  Well, that’s all about to change.  When she receives a threatening note, she dismisses it.  But, when her sister-in-law is murdered and all evidence points to Cathy’s brother, Jay, she knows he’s being set-up by whoever left her the note.  But why?


Cathy enlists the help of her two sisters, and Michael Hogan to prove Jay’s innocence.  Once engaged to Michael’s brother, Joe, Cathy and Michael share a special bond.  And now it is there job to convince the local police that the “facts” against Jay aren’t what they appear to be.


TRUTH STAINED LIES is a fast-paced novel that pulls you in from the very first scene.  The characters Ms. Blackstock created are multi-faceted with flaws and scars.  When I read the blurb about Cathy and her sisters moonlighting as investigators I was concerned that the storyline was going to be cheesy.  Maybe that was why it took my so long to choose to read this book.  But, I should’ve never doubted Ms. Blackstock.  The plotlines involving the Cramer sisters and the lengths they took to try and prove their brother’s innocents were well crafted and completely believable.  I can’t wait to read DISTORTION, book two in the series.  Luckily, I already have it on my book shelf.
Posted by Tamara Tilley at 11:21 AM